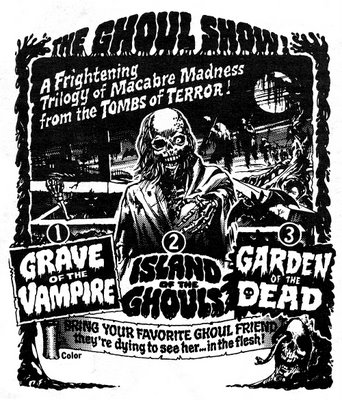 The Royal: Gone but not forgotten

It re-opens on the 24th of Nov. Fingers crossed for good programming... 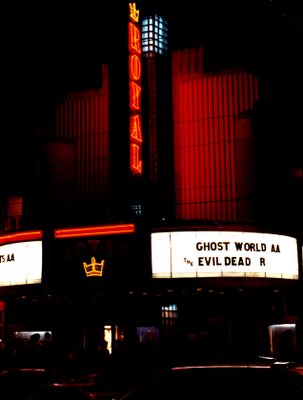 they never made it to the Stars... 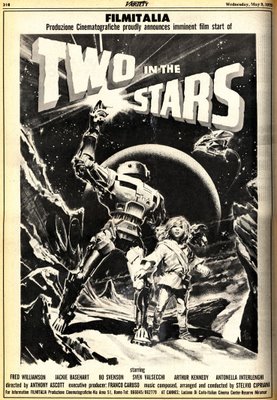 Pulled this ad from a Cannes market issue of Variety from 1979. Notice the proud announcement of an "imminent film start". Can't seem to find any listing for this film, but Bo Svenson was in a comedy with Thomas Milan in Italy circa 1978, so that might explain his potential involvement. Click on the image to make it BIGGER!
Posted by Colin at Monday, October 30, 2006 1 comment:

Part One: A Dark And Stormy Night

It's Friday night and I'm bummed. Why? In June Toronto lost four of its rep cinemas. This city is regarded by outsiders as a great film town, but that seems to be an observation made by guests here for festivals. Yup, lots of good fests, but the regular selections of films playing in the "hip" downtown area is limited.

Here is the selection of offerings for tonight, the Friday of the Halloween weekend in downtown chain cinemas in Toronto:

Nine films that I would consider seeing, but none fitting the Halloween theme! Nope, not seeing horror sequels. Heck! There aren't even any downtown screens playing JACKASS: NUMBER TWO or JET LI'S FEARLESS, film I still have to catch up on!

And the choices for alternative screens like The Bloor (really the last downtown rep house) also are lacking:

The Ontario Cinematheque (a division of the Toronto International Film Festival)
STROMBOLI; LE CHAT DANS LE SAC (a Quebecois classic from the sixties)

Blah! For spooky screenings this sucks! I could go on a rant of big box mulit-plexes, creative bankruptcy in movie-land, the evil of home video, that is not what I want to do. I feel I can complain a little since I did work on providing chilling cinema in years past at The Royal (in my opinion, the best of the rep cinemas and one of the ones that bit the dust in June, but is being revived on Nov 24th) and with Kung Fu Fridays - TEXAS CHAINSAW MASSACRE, PHANTASM, HAUNTED COP SHOP, ENCOUNTER OF THE SPOOKY KIND, MR. VAMPIRE 1 & 3, RETURN OF THE DEMON and others (thanks go to Tim Smy for believing in the spirit of cinema!). Okay, we just had the first edition of the Toronto After Dark Festival, but that was only a quick rush of flicks, really not the basis of my whining.

I have this manufactured nostalgia for going to the movies as growing up in the countryside, I never had the chance to have the proper "grindhouse" experience. Our TV only got 2-3 stations and the video age was just starting. My folks took me to films in the nearest city like Logan's Run and Barbarella. Thanks to voraciously reading through newspapers of the film listings for Toronto and the copies of Cult Movies and the Psychotronic Movie Guide that my parents gave me as a young impressionable lad, I have this strange affinity, despite never having sat in a fleabag cinema trying to watch trashy flicks, ignoring the snores of winos or bickering drug addicts. Ahh, the "grindhouse" experience! For an appreciation of the grime and sleaze of the 42nd Street cinema beat, read Steve "Shock Cinema" Puchalski's memories of the Selwyn.

Last weekend I attending a screening of HAXAN - WITCHCRAFT THROUGH THE AGES introduced by cinema sleaze historian Jack Stevenson. Selected for the Pleasure Dome experimental film series, it took place at CineCycle, run by Martin Heath, an avid cycle enthusiast and also film collector and projectionist.

A truly unique space, Cinecycle is in Martina's studio, a coachhouse/garage in an alley behind the 401 Richmond arts building below Queen and Spadina. Exposed brink walls, arcane old steam heat pipes line the wall, bike frames and parts mingle with film projector parts, fold up chairs and an expresso bar that also serves wine is a totally different way to see films in this day and age of the amusement park multiplex experience. Talking with Jack and Martin about the joys of seeing films and the projected experience I think kick started some ideas that had been laying dormant.

I set up a blog that was to tie in to the Kung Fu Fridays screening series that I was running, which ended with the closure of the Revue Cinema in June. I kept it going to share kung fu cinema pop culture nuggets and images from my own collection or from discoveries on the web. Over the short course since starting that blog, I found myself posting non-kung fu cinema items that loosely fit in the "grindhouse" spirit. Hence, I am setting up this blog to celebrate smelly celluloid palaces in the spirit of double, tripple and dusk til dawn bills! Not meaning to be a forum for reviews and news like many other existing sites, but a depot for visual rememberances of the temples. More images than words here possibly. Some scribbles about what played, what the cinemaas were like, the experience of them, etc., but mainly images of posters, lobbies, ads, and associated images from a range of horror, sci-fi, spaghetti western, kung fu, thriller, music, sex-ploitation, and forg art flicks.

And no, this is not any kind of viral marketing for the Tarantino/Rodriguez GRINDHOUSE project due out soon. Looking forward to that film, but keeping my expections at a reasonable level and not scouring the internet which tends to over-hype the whole experience.

This blog is done in the spirit of the various film zines that inspired me in my young adult years like Killbaby, Sub-Terannea, Trash Compactor, Monster! European Trash Cinema, Subhuman, Shock Cinema, Slimetime, Pyschotronic, M.A.M.A and others. Also inspired by the blogs: Datajunkie, Booksteve's Library, Bubblegum Fink, and of course, The Groovy Age of Horror.

Email ThisBlogThis!Share to TwitterShare to FacebookShare to Pinterest
Newer Posts Home
Subscribe to: Posts (Atom)
"Video killed the spirit and showmanship that movies was all about and turned the mob-mentality of a theatrical screened movie into a solitary, consumer experience that plays into the arrested-development 'collector' mentality of these nerds who just want to 'own' everything that came out in a certain genre and sit there like lumps and fast forward through everything. But they don't own the movies, they just own the bad, shitty little xerox copy." - Jack Stevenson