Victoria Vetri, former 1967 Playboy Playmate and star of When Dinosaurs Ruled The Earth and Invasion Of The Bee Girls charged with murder! 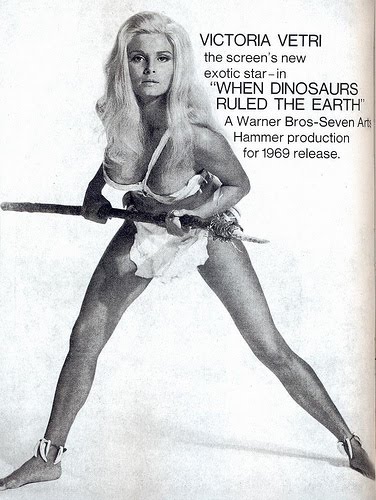 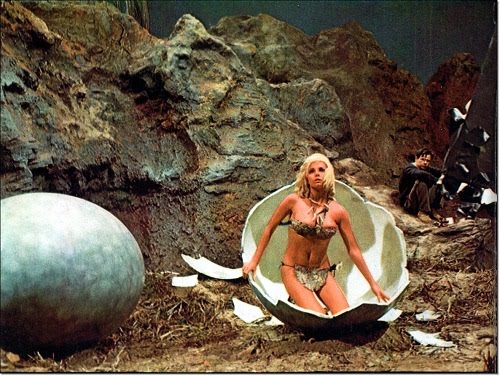 See her French tease photospread (below) from her heyday that I found over at a fine French blog that straddles art and sleaze, Au carrefour étrange. 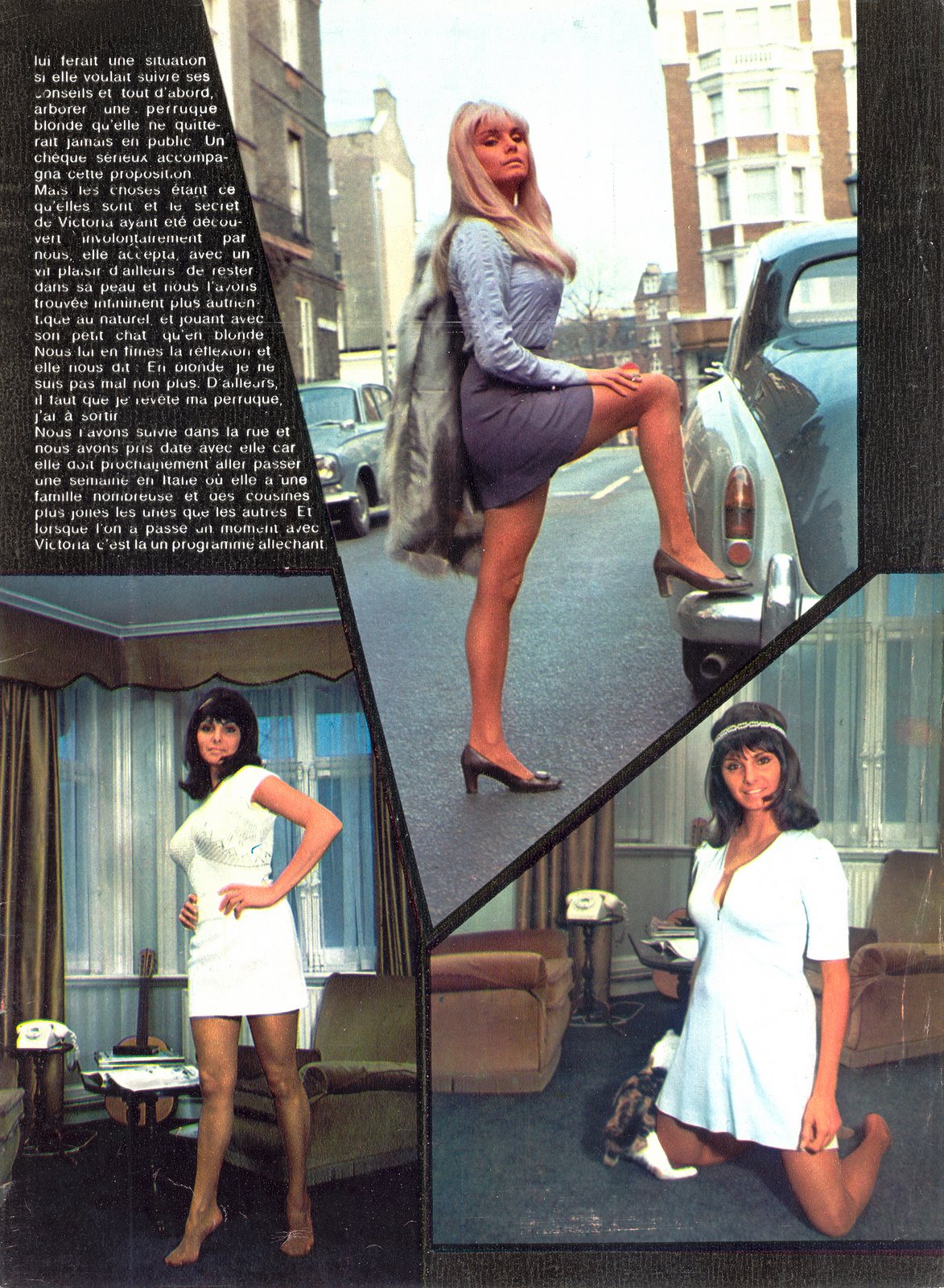 You can see naughty photos of her from her Playboy days over HERE.
Posted by Colin at Wednesday, October 27, 2010 No comments:

I'm excited to announce that I've selected four films to play over the Friday and Saturday of the Halloween weekend at the brand new, state of the art cinemas at TIFF Bell Lightbox here in Toronto. I've picked two personal favourites that I programmed in the past at TIFF's Midnight Madness, THE LOVED ONES and S&MAN, and then two films that have NEVER been screened in Toronto, Neil Marshall's debut film DOG SOLDIERS and Ti West's THE HOUSE OF THE DEVIL. Plus, before the midnight festivities, on Saturday, be sure to check out a spooky sci-fi double bill selected by Vincenzo Natali - Mario Bava's PLANET OF THE VAMPIRES + Ridley Scott's ALIEN!

Hope to see you at Lightbox for some tricks and treats! 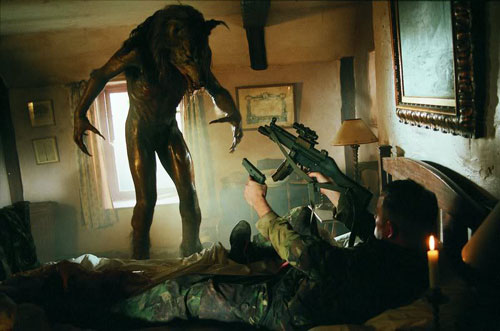 Grab your silver bullets and pack some wolfsbane for this rare screening of the debut film from cult director Neil Marshall (The Descent, Doomsday). A squad of British soldiers on a routine training mission find themselves pitted against a clan of werewolves in an action-filled romp that knows never to take itself too seriously (we’re talking to you, Underworld!). A cockney mix of Night of the Living Dead and Aliens, Dog Soldiers takes the conventions of the werewolf subgenre and tears them apart as the hairy beasts lay siege to the stranded soldiers in a battle that eschews CGI for deliriously gruesome physical effects. "One of the most gloriously unsubtle and adrenalized extreme shockers since The Evil Dead." – Seattle Times

"Talk on the Phone. Finish Your Homework. Watch TV. Die." 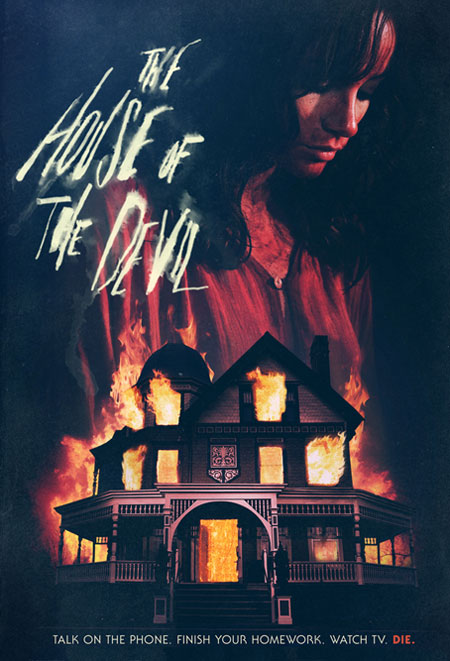 Desperate to earn some cash for a deposit on an apartment, pretty college sophomore Sam (Jocelin Donahue) accepts a suspiciously well-paying babysitting job from a very odd couple (cult actors Tom Noonan and Mary Woronov) in their creaky Victorian mansion deep in the woods. As a total lunar eclipse plunges the night into darkness, Sam finds to her horror that there is no baby... yet. Set in the 1980s and based on the "Satanic panic" urban legends that gripped America during the Reagan era, writer-director Ti West's House of the Devil is a remarkable exercise in suspense, a terrific—and terrifying—horror film that can be enjoyed by hardcore genre fans and casual viewers alike. "After years of vivisectionist splatter, here is a horror movie with real shivers." – Manohla Dargis, The New York Times
http://www.houseofthedevilmovie.com/ 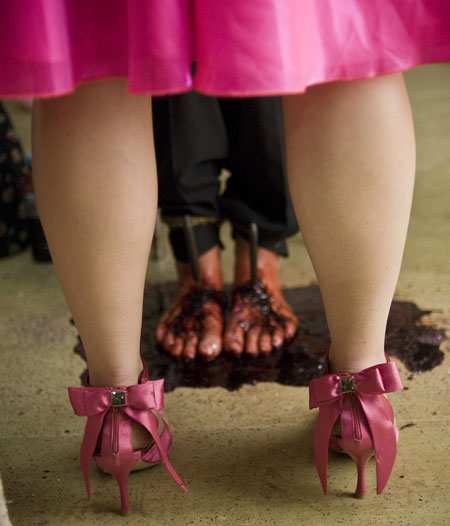 High school senior Brent (Xavier Samuel) lives in a haze of pot smoke and metal music to escape the pain of his dad’s death. His only ray of hope is his girlfriend Holly (Victoria Thaine), who is grounded, caring and gorgeous—a dream date for the high school prom. His plans to take her to the prom are thwarted by a secret admirer who has sadistic romantic intentions for Brent under the mirrored disco ball. First-time director Sean Byrne delivers a fusion of two horror classics, The Evil Dead and Carrie, with equal parts shock-laced jolts and tongue-in-cheek humour. A runaway hit on the festival circuit, The Loved Ones is destined to become a scary and deliciously deranged date movie classic. 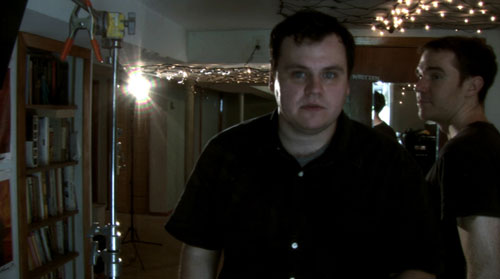 When horror filmmaker JT Petty (The Burrowers), sets out to make a documentary about the world of underground extreme horror films, things don't go exactly as planned. Initially making the comparison between filmmaking and voyeurism within the horror genre, he interviews academics (Carol J. Clover, author of Men, Women and Chainsaws), psychiatrists, actors and a selection of directors who are out to meet the demand of their disturbed audiences. One interview subject has created a homemade film series called "S&MAN," and as Petty digs further into his subject, trying to get him to reveal the names of the actors who play the onscreen victims, he begins to realize that they might not be actors at all. As the mystery deepens and Petty finds himself in dangerous territory, S&MAN becomes the most unsettling documentary film experiences in years.

“S&MAN is a post-modern masterpiece … A documentary of an astounding and surprising power, this is almost required viewing…” - Mathew Kumar, Twitch Film

“It won’t help if you keep repeating, ‘It’s only a documentary…’” - Richard Corliss, Time Magazine

Saturday October 30
8:00PM - PLANET OF THE VAMPIRES / ALIEN double bill
Join us for a rare screening of Mario Bava's 1965 sci-fi/horror hybrid Planet of the Vampires, a visually arresting and creepily atmospheric account of a spaceship crash on a distant planet, the survivors of which are beset by the resurrected corpses of their crewmates. Following Bava's low-budget classic, try to spot the Italian horror maestro's influence in the mesmerizing design of Alien, Ridley Scott's stomach-churning tale of a canoe-headed extraterrestrial wreaking havoc on the crew of an industrial space freighter. 35MM prints! – Curated by Colin Geddes and Vincenzo Natali.
Posted by Colin at Monday, October 25, 2010 1 comment:

Found this in a 1972 issue of Playboy that someone left in the cinema WC. 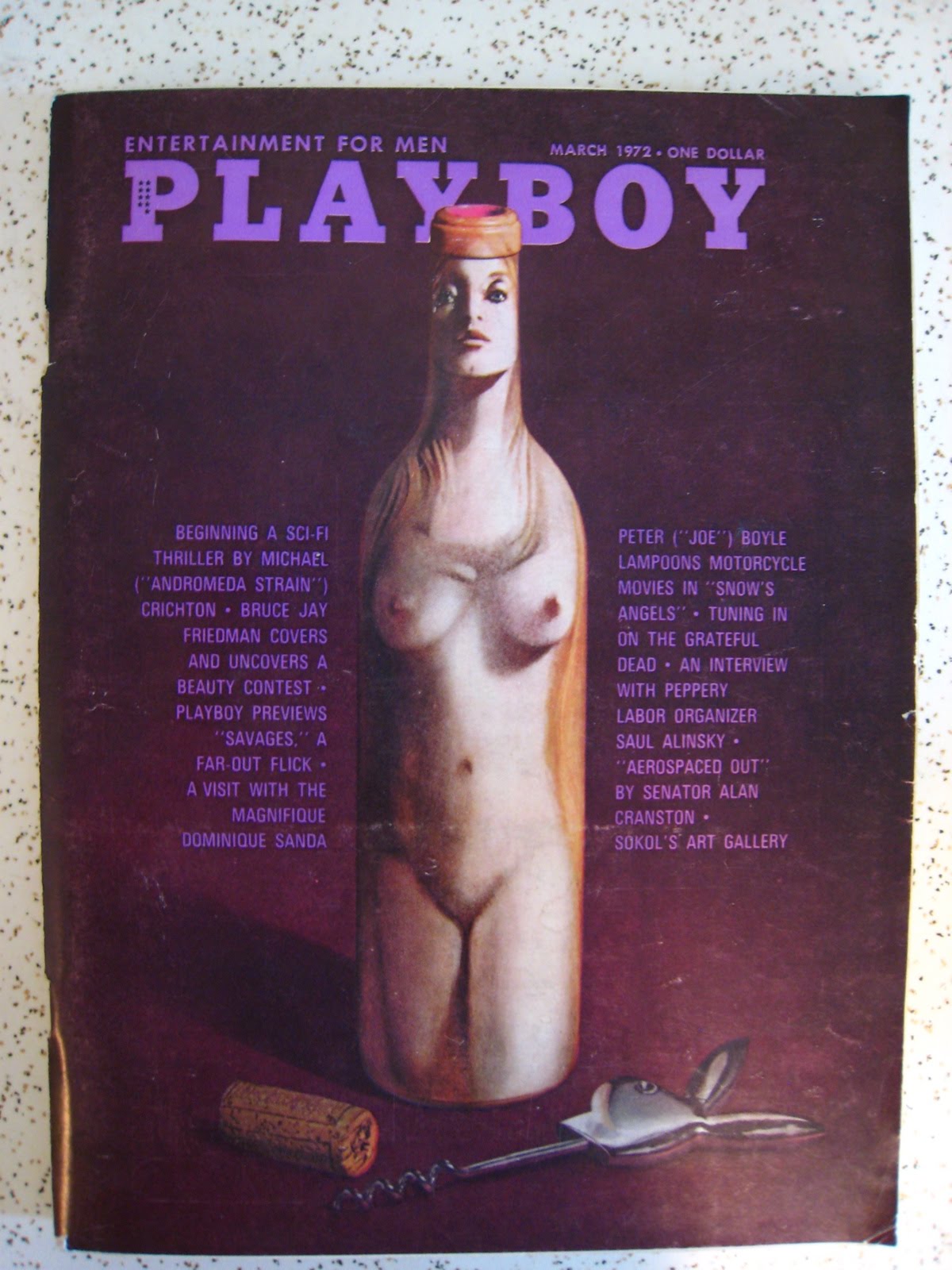 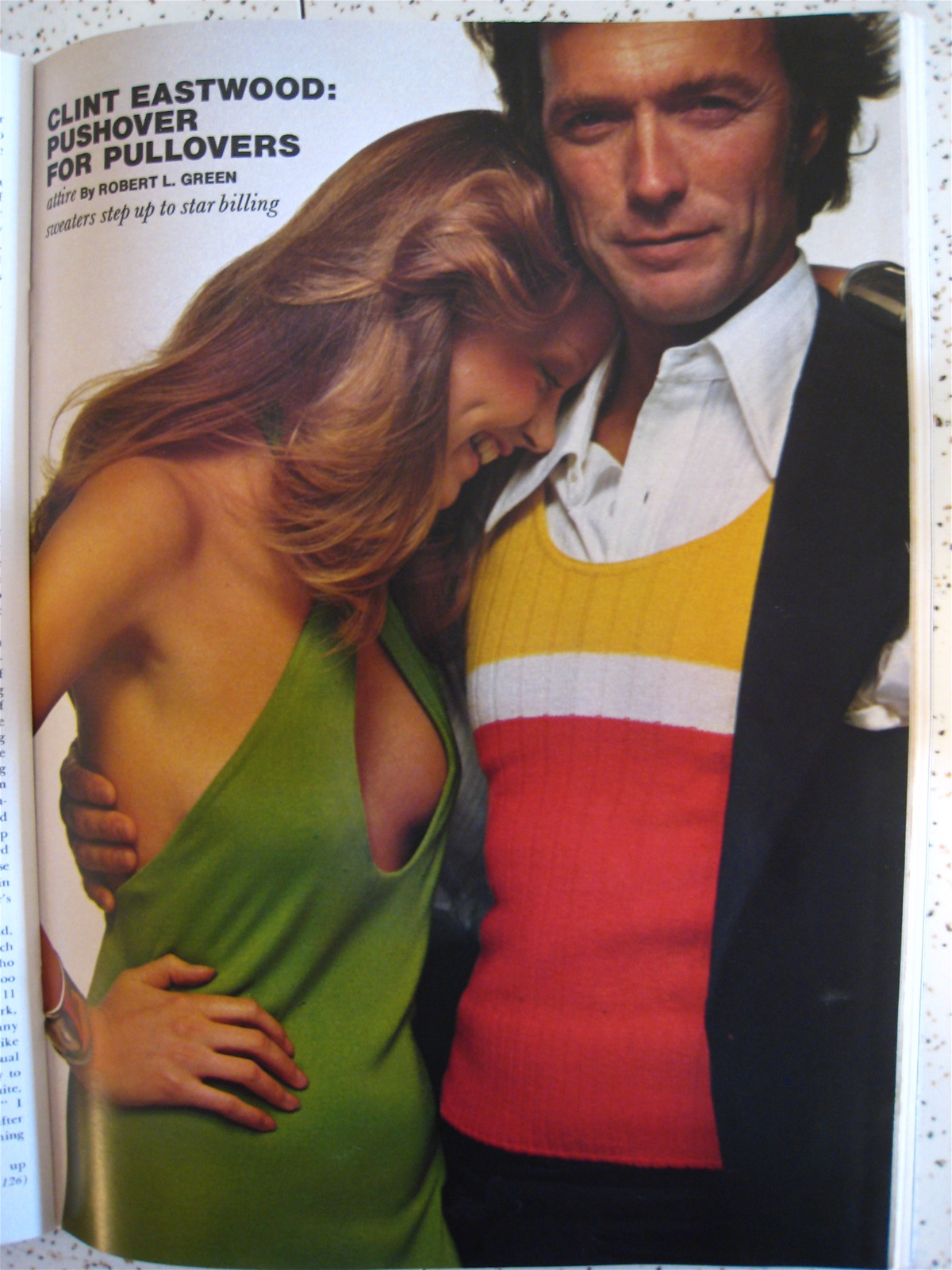 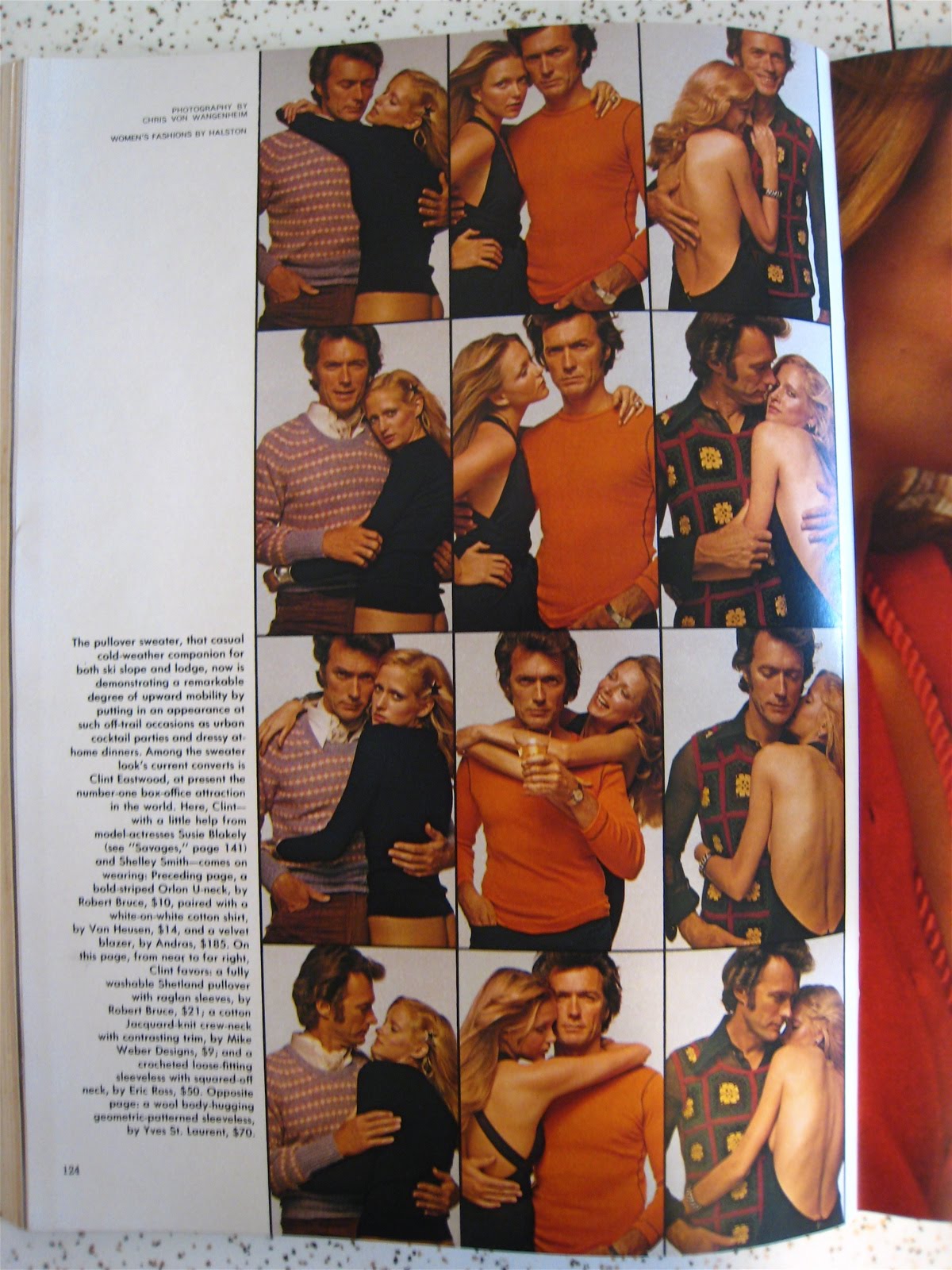 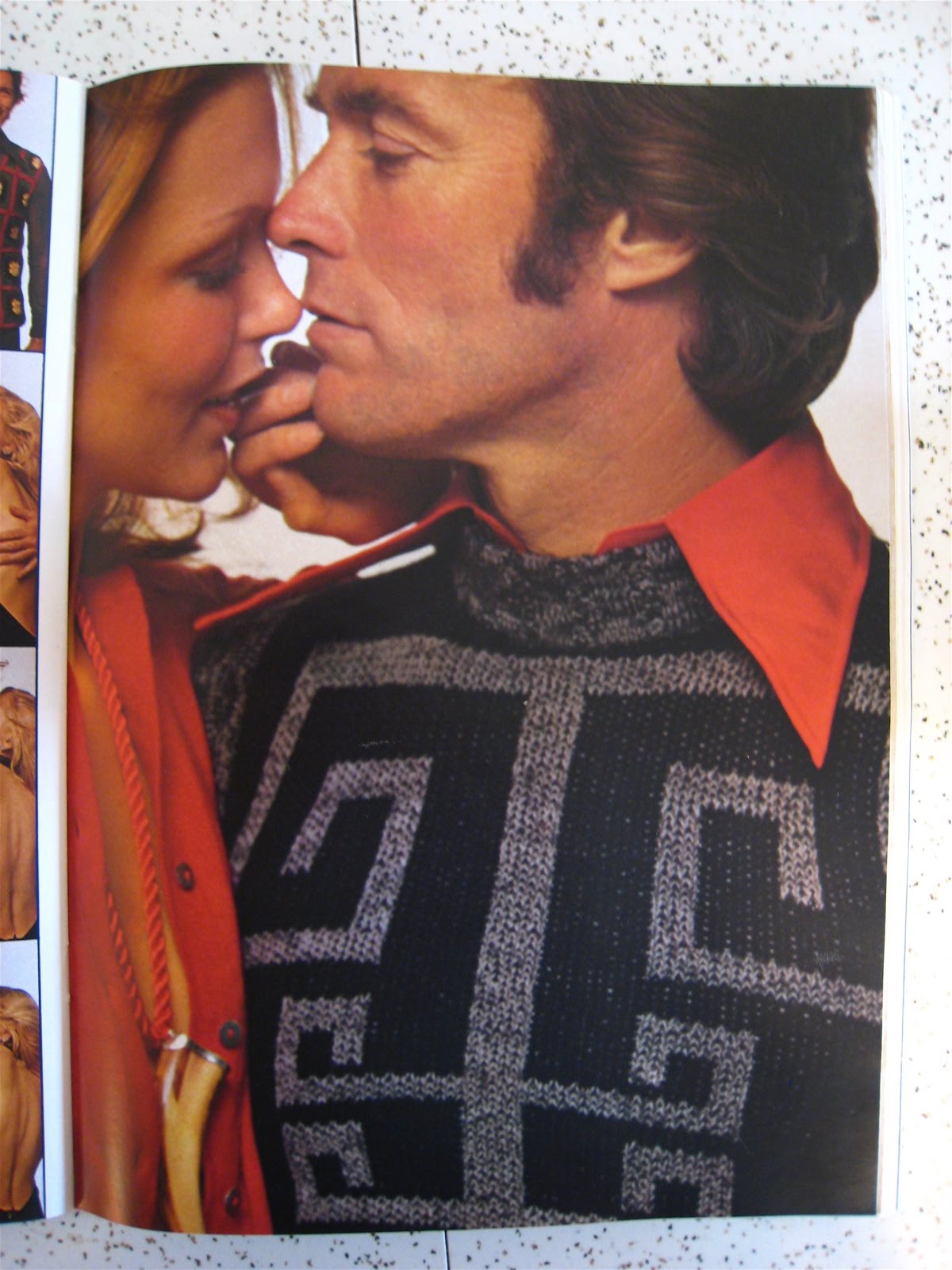 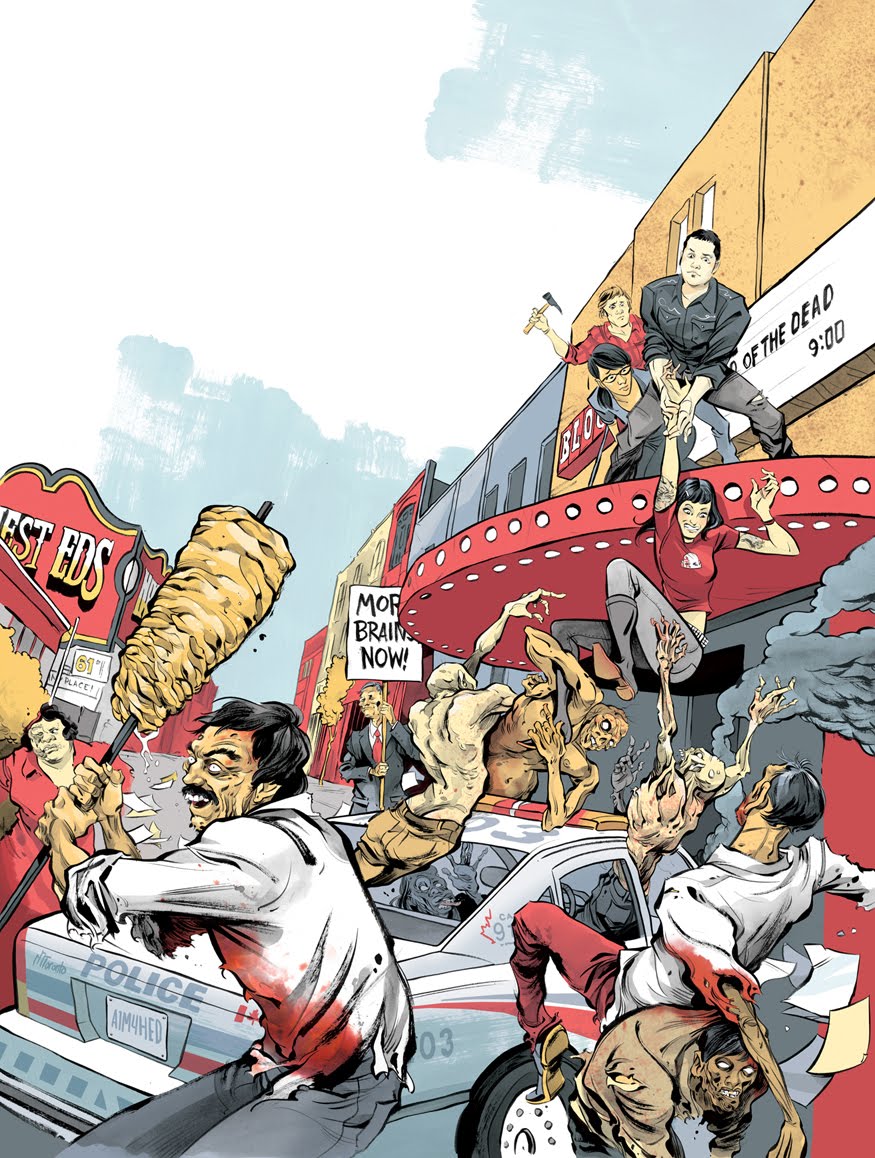 "A big full page in Toronto Life this month on how Toronto loves zombies (Romero shoots his movies here, and we have zombie walks!):"

Check this cool artwork by pal of the blog, Kagan McLeod that I just found over on his website/blog. The mayhem takes place at the intersection of Bloor and Bathurst with several Toronto-centric references.
Posted by Colin at Friday, October 22, 2010 No comments:

A new BADASS on the block

We'd like to welcome to the web, the new blog by our brothers at the Alamo Drafthouse - Badass Digest. Edited by Devin Faraci, formerly of Chud.com, this promises to be a new daily distraction where many of our tastes will intersect. And the first Badass in their Hall of Fame? Warren Oates, of course.
Posted by Colin at Friday, October 22, 2010 No comments: 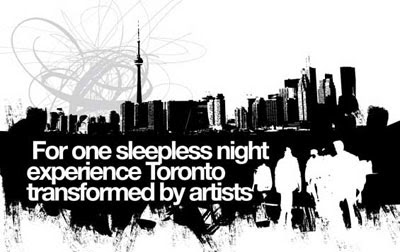 Last night if you were in the downtown core of Toronto, you would have experienced a strange phenomena from 7pm to 7am... Nuit Blanche (or "Scotiabank Nuit Blanche" if you feel the need to include the corporate behemoth that bank rolls it).

"Toronto's annual sunset to sunrise celebration of contemporary art returns to mark a five-year milestone. Discover art in galleries, museums and unexpected places. From building façades and city parks to alleyways and heritage buildings, choose from more than 130 destinations and chart your own path."

I was able to curate a little project in a 500 seat cinema in the newly opened TIFF Bell Lightbox building. There were several other events and installations in the building which houses five state of the art cinemas and gallery spaces in a wide open design. The structure throbbed with energy until the wee wee hours of the morning.

My little project was somewhat fitting considering celebration of high cinema at Lightbox since it opened mid-September. On the same screen where earlier that week The Passion of Joan of Arc screened with a live orchestra, I defiled the snooty intergrity of the space by projecting over seventy trailers for an assortment of sleazy, bloody and action films in a two and a half hour show that ran continuously from 9:30PM to 7:00AM. I called my event --- GRINDBOX! 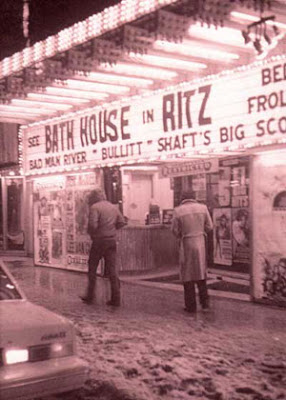 A tribute to the beloved American institution of the grindhouse – a term for theatres that mainly showed exploitation films, named after the defunct burlesque theaters located on New York City's 42nd Street where "bump n' grind" dancing and striptease were featured – this presentation of vintage trailers for horror and exploitation films from around the world is a cinematic celebration of the weird, the wild and the wonderful, balanced on the border between art and trash. Note: Mature content, suitable for audiences 18+. – Curated by Colin Geddes.

The trailers came from my own film collection, from the holdings of Vagrancy Films in London, Ontario and from the fine, honourable gang of cinematic soldiers at the Alamo Drafthouse in Austin, Texas. It was quite the undertaking to splice it all together (thanks to James King for his precise dedication to this task!) and it will certainly be the only time that this assortment of trailers will been shown together. In other words, if you missed it last night, you'll never get a chance to witness this spectacle ever again! 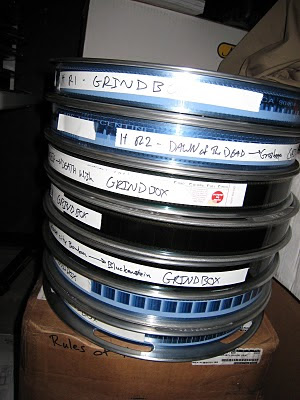 Of course, there had to be ample warnings about just what folks were getting themselves into... 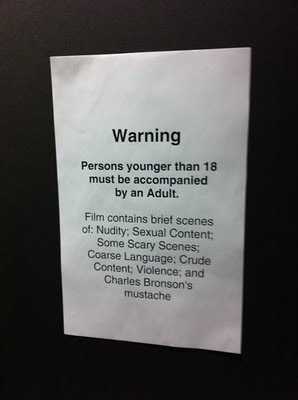 Thanks to Sara Schmidt for snapping this pic!
Here is the playlist for Grindbox:

The best reaction from the crowd? Easily the appearance of Chuck Norris in the Invasion USA trailer. The trailer that shocked them the most? The uber gory trailer for Make Them Die Slowly. That one was quite the skull fuck and even shocked me as I hadn't seen it before.

I got lots of great feedback from the show and who knows, maybe there will be Grindbox 2! in 2011? 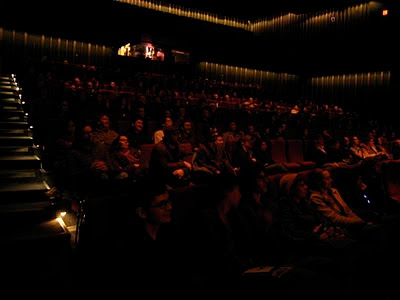 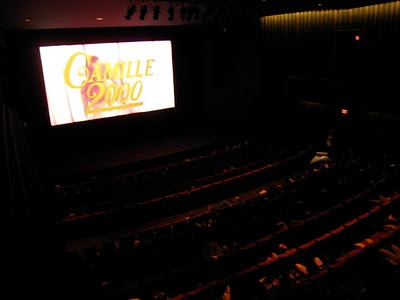