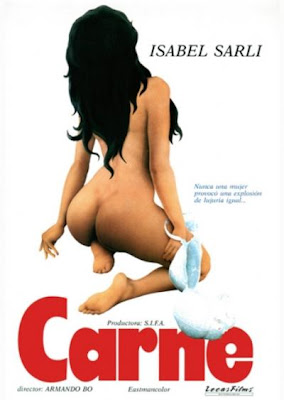 Isabel Sarli was a 60s/70s sexbomb who starred in several scandalous softcore movies in Argentina that were massively popular in Latin America despite the views of the Church and of various dictatorships. Known as 'Coca' for her Coca-Cola bottle silhouette, Sarli starred in a series of sleazy potboilers directed by her husband Armando Bo, and they look to be Russ Meyer-esque in their wanton celebration of sin and pulchritude...with such titles as Carne and Fuego, how could they not be?

When I was down in Buenos Aires this Christmas, I was hoping to be able to pick up a yellowed Isabel Sarli one-sheet to bring home, but the available posters weren't quite sleazy enough. 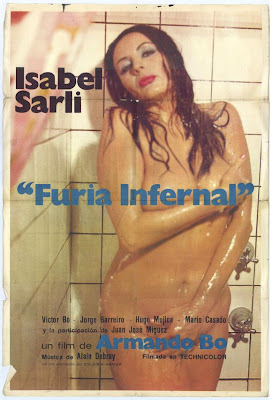 Last summer the Film Society of Lincoln Center ran a mini-tribute to the films of Isabel, including a recent documentary on her life called Carne Sobre Carne (Flesh on Flesh). Here's an excerpt from a tribute video to Sarli and Bo from the man himself, John Waters, confirming her secret influence.

You know what would be good? A second Isabel Sarli retrospective in the English-speaking world!

The Sweetest Kittens (Have The Sharpest Claws)

Trailer for 1977's The Uncanny! They should have called it Claws! Between this and Hausu, cats were getting a lot of work in horror films that year.

It's a new year and a perfect time for an old practice of mine to show up. Following up on the most recent post by Colin, I find it appropriate to point out some evidence to the fact that it wasn't a cakewalk for Teenage Cowgirls to be hailed the best western sex film yet. There was some pretty good looking competition out there, you know.