a hole in my heart where a fire rages 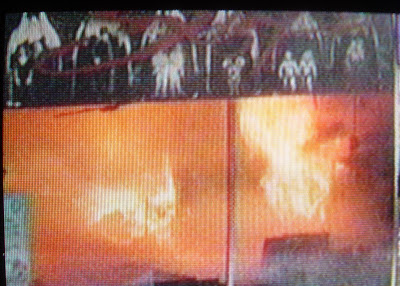 Today I woke to the news that a 6 alarm fire had consumed the block on Queen Street that was the home to the Queen location of Suspect Video, a store where I worked for several years. I went on to manage at the Markham Street location, but started out at the Queen store and I fully credit it's owners, Luis Ceriz and Merrill Shapiro, for making me the person that I am today.

Luis and Merrill were supportive of everything I did - zines, screenings, poster + print collecting, film fest, travel, drinking, etc. Personally, I think that Luis Ceriz is an unsung hero of film culture in Toronto. Suspect is a vast resource forr film buffs offering up so many gems that you can't access from any other place. While there are other video stores that stock similar wares, Suspect also had books, magazines, toys, ephemera and sponsored events.

When I published my zine Asian Eye, Luis sold it for me on consignment, something he did for many other zinesters including Kagan McLeod's Infinite Kung Fu and the dearly missed Infiltration. When I cleaned out the basement of the old Chinatown cinema, the Golden Princess (now The Royal) of posters, Luis let me sell them in the store and even drove me to NYC in a cube van filled with posters to sell them at the Chiller Theatre Convention in New Jersey. He took out ads and sponsored my film screening events like Kung Fu Fridays. When I returned to the Princess and got possession of 200 Chinese 35mm film prints, he helped me store them in the basement of the Queen Suspect/Record Peddler. Now that collection is in the process of being donated to the University of Toronto. I can't do justice the amount of respect and praise that I have for Luis. That is why my heart goes out to him and his family right now.

Suspect was not the only loss as the block also housed one of the last and best stereo shops, National Sound and also Duke's Cycles where I just bought a bike tire pump from a few weeks ago. This fire will usher in a new, urbanized and sanitized Queen Street. A true loss.

Here is a story about Suspect on the CItyNews website that was posted just days ago. Here are reader submitted pics of the smoke and devastation of the fire 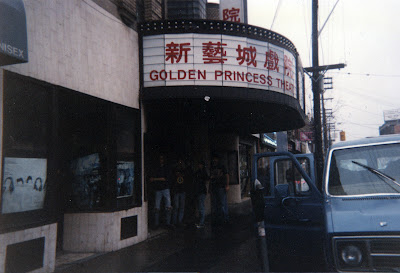 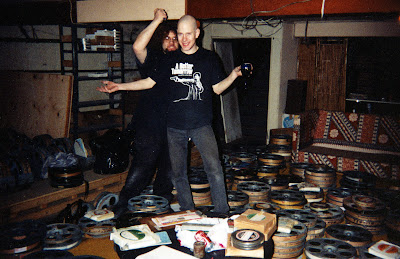 Garo and I trying to assemble mixed up single reels after our haul. 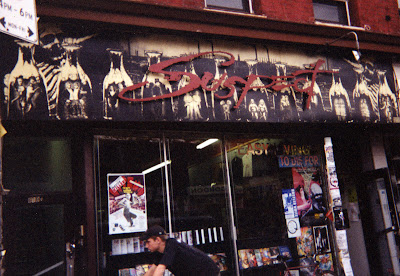 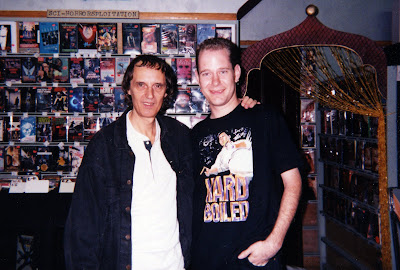 Dario and I in happier days before he called my endeavours "racist." 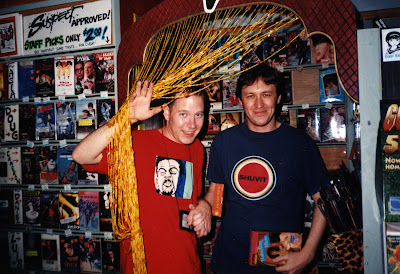 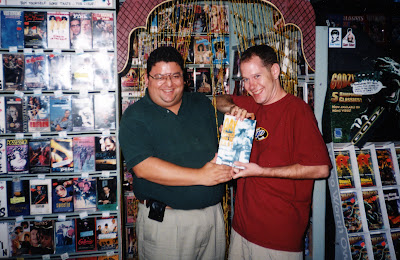 Another chance meeting in the smut room - Gerald Martinez, author of
"What It Is, What It Was" and part of Tarantino's Rolling Thunder dream.
(And again - where are you?)
.
Posted by Colin at Wednesday, February 20, 2008

Email ThisBlogThis!Share to TwitterShare to FacebookShare to Pinterest
Labels: tragedy

I was trying to keep up to date with the radio news whenever I could but it wasn't until I got home and on here that I saw the full extent. Brutal.

God, my heart sank when I realized the fire this morning took out Suspect on Queen - what a video resource it was... losing it in such an arbitrary and crushing manner is vicious news. How much of their catalogue can one hope had been rented over the night and therefore spared this destruction?

And I second your good wishes for Luis. Suspect Video is very much a part of what I like about living in this city and I've always quietly admired him and Merrill for doing it.

Suspect was just another reason why Toronto is a cool city to live in. I was gutted watching the fire this morning.
lovely post Colin.
All the best to Luis and the Suspect employees.

I've never been to Suspect Video, seeing as I've never lived in Toronto, but I love places like that and its always a tragedy to lose them.

Recently one of the first video stores in Calgary was forced to shut its doors. It was a seriously groovy place full of love. I don't think they threw out a tape since the day they opened.

I only hope that in my own way I can help create an environment like that here in Montreal. Even if the place is gone, keep the spirit alive!

Was surpeised yesterdy when i seen the burning as well and will miss suspect - just too stop in and look around could make a crapy day feel all that much better.

Was good to read your post on Suspect and the block in general. Will be hard too walk past it come Sat.

This is terrible news, specialist stores like this are so important for a film community but are a dying breed. I did visit Suspect once, it was of course a mandatory part of my only visit to Toronto (so far!) It reminded me of Naked Eye in San Francisco, which I think is still going strong. I hope the owner can set up a new place!

I'm living in Nashville, TN now. I had just written a blog post Tuesday about being homesick for Toronto. Partly because of a song by MC Abdominal called T.Ode. In it he raps about everything he loves about Toronto, he even includes a mention of Suspect on Queen.

As you know, I spent a lot of time in Suspect (both locations) over the years. As a kid, I loved the place, it opened my mind to films that I would never have seen elsewhere. I always hoped I would end up working there.

I remember picking up zines like Rivot and magazines like Maximum RockNRoll at the Queen location. Or just hanging out to say hello to Merrill and Luis, Doug and yourself.

I'm heading home this weekend to attend PodCamp Toronto at Ryerson. I plan to take a deep breath and visit Queen and Bathurst to witness the aftermath for myself.

This is truly a loss of major magnitude. If David Miller has any balls he'll build a park in place of those buildings, but of course the space will probably end up as another Gap and/or condos.

Maybe we can do a pint when I'm home. Email me: davemadethat@gmail.com. Please express my condolences to Luis and Merrill.

Many thanks Colin. To all those that may be interested - there is now a discussion forum online for Suspect's Queen West store.

Very sad news. Suspect was one of those places that made me realize Toronto was where this small-town boy wanted to be. The only thing I ever won from one of Colin's pre-screening raffles was a Suspect t-shirt. By some strange coincidence, I was wearing it the day of the fire.

Wow! Colin...you rock!
This is Daniel, now Ex-Manager and Head Buyer for Suspect's Queen St. store. A heartfelt tribute to the storied history of one of T.O.'s best kept secrets.
I am currently attempting to resurrect the DVD collection and open a new store a.s.a.p. - what else could I possibly do! You can follow the progress and pitfalls on my blog at: 500wattbrain.blogspot.com