Welcome to the EC, Bitch! 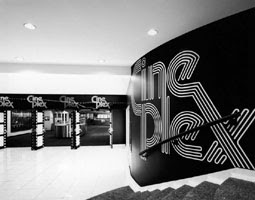 The Eaton Centre Cineplex was the first mega-multiplex theatre in the world. There were 18 screens when it opened in 1979, expanding to 21 a few years later. When the place first opened it was more of an art-house theatre, classy, subtitled movies for the most part, with a running selection of retrospective fare. When I was a kid I went to see Casablanca, The Public Enemy, The Treasure of the Sierra Madre...in the summers they would have two-for-one James Bond double bills, shown in chronological pairs every week. But in the early eighties, they dropped the rep programming, moved the artsy shit over to the Carlton and turned the place into your classic eighties mall multiplex. New movies and big hits held over indefinitely.

It was a very depressing place to see a movie. The theatres originally had rear-screen projection, so they would bounce the movie off a mirror behind the screen. To me the picture always looked distorted when screened this way. Most of the screening rooms were claustrophobic, more like an interrogation room out of '1984' than a movie theatre. 50 seats, bad sound and mysterious stains on the screen. And the place was a bit of a maze.

Eventually I realized the unappealing conditions in the theatre were conducive to enjoying incredibly bad movies - I would go down there with friends on $2.50 Tuesday without having consulted the listings first. We would look up at the marquee, determine the worst film playing that night, and buy tickets. We saw Justine Bateman's Satisfaction using this method - it was showing on two screens and one show was sold out; for our showing we had the place to ourselves, in one of the theatres in the basement. It was like a private viewing.

I saw many hysterical James Woods films there, like The Boost and Cop. Carl Weathers in Action Jackson. Every Golan-Globus film playing at the Eaton Centre was a must see, like Invasion USA with Chuck Norris, Lifeforce or Street Smart. It was there I was introduced to the genius of Steven Seagal.

Towards the last days of the Eaton Centre Cineplex I guess they couldn't get away with charging first-run prices anymore so they changed the place into a bargain-priced theatre where month-old movies would go to die. Tickets were at one point $1.50 any time, which transformed the place into a trouble magnet for downtown hustlers, weirdos and cheapskates whose predecessors used to be able to hang out as long as they wanted in Yonge Street grindhouses like the Rio (4 Big Hits!) or the Coronet. ($1.50 is the cheapest hotel rate in town. And there are movies in your room. Too bad check-out time was at midnight - the Rio gave you till 5 AM.)

Anyway when I realized it was funner and cheaper to go to the Eaton Centre to watch Supernova, Double Jeopardy or Deep Blue Sea than it was to rent the DVD (plus you're surrounded by sociopaths!) I started going there more often, though it was getting bleaker and bleaker to be there. I was convinced Cineplex would keep running the place until the last lightbulb burned out, which must have happened in 2001. The last movie I saw in there was Coyote Ugly. The theatre, perhaps rightly, smelled of urine that afternoon.

Does anyone know how the multiplex rear-screen projection system at the Eaton Centre operated? It must have been insane. 
Posted by Jesse at Wednesday, March 07, 2007

I love the picture of that curved wall. I only attended a couple or three films there but I do remember it vividly. A lot of mall rats and stuff. A total youth hangout that I'm sure must have scared any rational adults. What's there now? I'm trying to remember where it was exactly. Mind you, I don't get down to the Eaton Centre much anyway.

Hey, just thought I'd drop by and say thanks for writing such an awesome article! Although it may not seem so at first, I was pretty inspired by it.. enough to write up a response:
http://www.firstshowing.net/2007/03/08/the-way-cinema-used-to-be/

I know it's shameless advertising, but I just wanted to drop by and say I'm glad to have found this blog and will definitely continue reading Popcorn and Sticky Floors!

i met a guy once who had been a projectionist there. he said the setup was ridiculous: the booths were so small that some projectors were installed sideways directly into the floor and bounced off several mirrors in the booth. i think a few screens had the same movie so they just split the beam into two places.

i remember seeing ads for the 3D movies they played there, like "andy warhol's frankenstein" and "prison girls". i can't imagine how furiously adequate the 3D set-up was.

i had always wanted to go there when my parents went big city shopping in the early 80s, but never got a chance until later on in the early 90s. i saw "freaked" opening night there when it played for a week.

i started going more often in the last few years when the $2.50 price was great for all day movie hopping. by this time the place was obviously quite neglected: the carpet was getting ratty and every other seat was ripped, and it was getting harder to find one with actual working armrests. worst of all those big number scheme on the oustide of the auditoriums were long gone. most of them had the movie poster and a plastic number beside it. but i remember one of the auditoriums had no identifying mark except for the cinema number written on the wall in ballpoint pen.

i never saw any lowlife grindhouse action, but it was amusing to hear first-timers walk into an auditorium and say "this is it?" that always happened before every movie.

i only know one chatty film fan who uses 'furiously adequate' as loosely as this. hi, brian!

lol - good article I rember this place well , esp entering into the bowls of the place and the port holes on the doors looking into the dingy place.

Trying to scrach my brain to think what the last film i had seen here.

In an odd way I both miss and hate this place , for the price it was an adventure.

I wish I would have gone to the theater more when I was a child.

The aroma of stale Chinese food from the restaurant situated directly next to the theater is one that is permanently etched into my brain.

I loved that shitty theater.